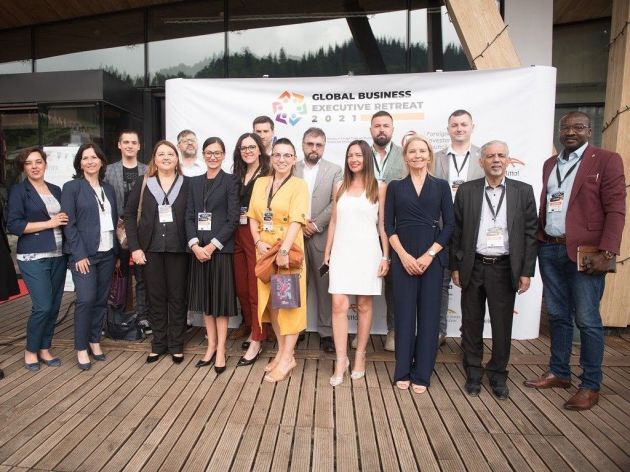 The first conference called Global Business Executive Retreat 2021, held from 1 to 4 July on Mount Jahorina, organized by the Agency for Foreign Investment Promotion in BiH and the Council of Foreign Investors in BiH (FIC), and sponsored by the Ministry of Foreign Trade and economic relations of Bosnia and Herzegovina, has been successfully completed.

During the three days, the conference was attended by hundreds of participants from different parts of the world, as well as more than thirty panelists and keynote speakers, who covered the topic of free zone, innovation and entrepreneurship, digitalization and tourism today through interesting panels.

On the first day of the conference, a panel discussion was held related to the establishment of free zones in Bosnia and Herzegovina according to the model of the most famous free zones in the world and the region. In addition to the Minister of Foreign Trade and Economic Relations of BiH, Staša Košarac, this panel was attended by the President of the Foreign Investors Council, Branimir Muidža, and two keynote speakers, Zoë Harries, Senior Advisor for Foreign Direct Investment and Special Economic Zones and Project Director Free Zone of Dubai (HIF), Harries is an expert on zone competitiveness and business modeling and heads the World HIF Advisory Department and supports governments, special economic zones and business parks in attracting foreign investment.

The second keynote speaker was Vladan Stojanovic, a project associate at the Pirot Free Zone in Serbia, which is considered one of the most successful and largest free zones in the Western Balkans region.

During the participation in the panel, Minister Košarac stated that one of the ways in which the state could attract foreign investors is the formation of more free zones and that investors must not be alone and that the BiH Ministry of Foreign Trade and Economic Relations will be a service and help with every problem. in order for investments to increase and flow smoothly.

Branimir Muidža, President of the Council of Foreign Investors, stressed that BiH must turn to attracting foreign investment because there is interest in investing in our country and that the key message is that no serious investor has lost their capital doing business in Bosnia and Herzegovina. In addition to the above, Mahir Selimović, director of the Free Zone HOLC from Puvačić, as well as Mirko Ćurić, mayor of Trebinje, also participated.

Representatives of some of our most important investors, ArcelorMittal CEO Nikhil Mehta, and Valentin Ilievski, Vice President of Messer Group for Southeast Europe, as well as Ahmed Al Banna, President of the World organizations for training and development from London (International Federation for Training and Development – IFTDO), as well as a respected scientist, Natasa Golic, head of the Technology Transfer Department of the Institute of Molecular Genetics and Genetic Engineering (IMGGE), University of Belgrade.

A special contribution to the discussion and the conference itself was given by the representatives of the delegation of the Kingdom of Bahrain led by one of the most important businessmen from that region, Jawad Yousuf Alhawaj, who pointed out the importance of establishing a direct flight between Bahrain and Bosnia and Herzegovina. and strengthening business ties between our two countries.

The conclusion of the discussion indicates that, regardless of the challenges that every economy and society face due to the pandemic, it is necessary to continue investing in people and education, and develop competencies in order to strengthen competitiveness and strengthen the growth of both domestic and foreign companies.

On the second day of the conference, panel discussions were held dedicated to high technologies and innovations that serve the development and advancement of entrepreneurship. One of the keynote speakers was Martin Mössler, CEO of Science Park Graz from Austria and CEO of ESA Space Solutions, one of Europe’s largest innovation and business start-ups who successfully runs and develops around 60 startups a year.

Abdulla Al Hamed and the president of the Bahrain Internet Society also spoke about the importance of digitalization. He has received awards for helping to develop the Trade and Industry Roadmap for the Kingdom of Bahrain and participating in setting up a national ICT strategy, and achieved first place in the Middle East, third in Asia and thirteenth in the world in a UN survey. In addition to his recent appointment as a private sector representative in setting the future national ICT strategy, he is currently engaged in a project of digitization and implementation of e-government for the United Arab Emirates government.

The conference was especially important with the participation of representatives of investors from West Africa and the founder and president of the Business Association of Central and Eastern Europe and West Africa (CEEWABA), Michael A. DADA, who recognized the potential of our companies and pointed out the importance of establishing close business ties with Western countries. Africa, primarily Nigeria and Ghana.

Representatives of Huawei BiH, Xu Kun, CEO, also participated in the panels on the second day of the conference, emphasizing that digitalization could be the key to the development of society, and Huawei BiH is ready to cooperate with all stakeholders to give its full contribution to the digitalization process. . – Successful digitalization must be a joint effort of all relevant participants (telecom operators, ministries, regulatory agencies, companies, universities) and only in this way can we achieve great results – said Kun.

Speaking at the “Innovation and Entrepreneurship” panel, Zećir Kasumić, Director of the Public Relations and Communications Department at Huawei BiH, pointed out that innovation has been key to Huawei’s survival and development in the last three decades.

– Huawei has continuously invested over 10% of our sales revenue each year in research and development, which totaled $ 100 billion over the past decade, and the company plans to invest another $ 100 billion over the next 5 years. Innovations are needed to improve the quality of life, make companies smarter and create a more inclusive world – said Kasumić.

Mirza Ustamujić, CEO of Payten, Dino Ibrahimović, Director for MENA of Infobip, Nikola Maksimčuk, representative of Telemax, who presented smart benches under the brand City Gecko, Bojana Škrobić Omerović from Prointer, as well as representatives of institutions also took part in the excellent discussion. , The Ministry of Transport and Communications of BiH, the Regulatory Agency for Communications of BiH and the Chamber of Commerce of the Republic of Srpska.

On the third day of the conference, the topic “Tourism Today” was discussed, which was attended by representatives of tourist boards and organizations from Sarajevo and the Municipality of Pale, Kenan Magoda and Dragan Jakic, as well as representatives of the city of Trebinje and the Chamber of Commerce of Republika Srpska.

All participants agreed that if Bosnia and Herzegovina, if it wants to overcome the crisis faced by the tourism sector during the coronavirus pandemic and return to the results of 2019, must adopt strategies that will focus on joint performance and creating a joint tourism offer representatives of both entities. The panel was also attended by Božena Kaltak, UNDP Regional Program Manager, who spoke about the importance of the Via Dinarica regional project.

In addition to an extremely interesting official program, international and domestic guests of the conference had the opportunity during their three days in Bosnia and Herzegovina through business meetings and networking to enjoy entertainment, such as a tour of Sarajevo, a tour of the Bosnian Pyramid of the Sun, and meet the beauties and the tourist potential of the Olympic mountain Jahorina.

The importance of the first Global Executive Business Retreat 2021 was recognized and supported by Arcelor Mittal, Huawei, m: tel, Infinity Group, Messer, City Gecko by Telemax, Aparthotel Vucko, as well as numerous other international and domestic partners and associates.

Global Business Executive Retreat 2021 fulfilled all expectations of organizers and participants and created an excellent platform for exchanging experiences and best business practices, but also for networking and starting cooperation of renowned experts and eminent names from the global economic and political scene, the organizers said.