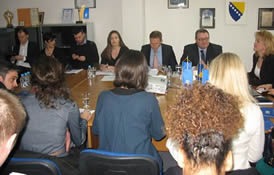 The Director of the Foreign Investment Promotion Agency of BiH (FIPA)
Gordan Milinić and his associates received representatives of 14 media
from the EU countries who were introduced to the Bosnia and
Herzegovina’s economic sectors which could attract foreign investment.

First of all, the Director Milinić thanked journalists for their visit, pointing out that they visited the main address in the country to obtain information on investment opportunities in BiH.   He briefly presented the Agency’s activities in the field of attracting foreign investment and promoting BiH as a good location for investments, including cooperation that FIPA has with existing foreign investors in BiH. An overview of foreign investments in BiH was given on this occasion, with a focus on the most significant investors; reasons for which BiH is favourable destination for investing were pointed out, and then were presented the sectors of tourism, energy, agriculture, metal and textile sector, ICT, industry of auto parts and wood sector with basic information on each sector, resources and projects that could attract investments.

Journalists were addressed by Mr. Branimir Muidža, General Manager of HeidelbergCement Group for BiH and Croatia and President of the Council of Foreign Investors of BiH. Mr. Muidža talked about the business environment in BiH, and his experience in business, as well as about advantages and difficulties faced by foreign investors in BiH. Guests were also addressed by Mr. Valentin Ilievski, CEO of Messer BH Gas and Messer Tehnoplin BiH and Member of the Board of the Council of Foreign Investors, presenting positive examples from running business and his experience as one of the most successful investors in our country. The visit of the media representatives to BiH was organized within a project of the Directorate of the European Commission for Neighbourhood Policy and Enlargement Negotiations with the aim to better inform the public in the EU about the situation in the candidate countries and potential candidates for EU membership, as well as about opportunities for investing in those countries.