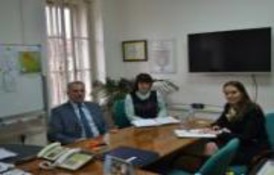 Muharem Sabic, Minister of Economy of the Sarajevo Canton met with Sanja Miovcic, Executive Director of the FIC and discussed about organizing the “International Business Forum 2016” to be held in mid-September 2016 in Sarajevo.

The Minister of Economy said that “International Business Forum 2016” aims to present projects, opportunities for business development and investment in the Sarajevo Canton, which would encourage new business initiatives, as well as promote the region and give support to the development of domestic and foreign investment. The Forum participants will be representatives of foreign and domestic companies, prominent persons in the political and economic life of the country and the region.

previous
Corporate gathering of the FIC members with the Prime Minister of the Federation of BiH, Mr. Fadil Novalić
next
Representatives of 14 media of the EU countries visited FIPA