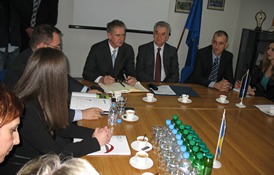 Sarajevo, 19 February 2016 – The Vice President of the Council of Ministers and Minister of Foreign Trade and Economic Relations of BiH Mirko Šarović and his associates had a meeting with the management of the Foreign Investment Promotion Agency of BiH (FIPA) led by the Director Gordan Milinić and members of the Steering Board of the Agency.

The meeting discussed the future cooperation between the Ministry and the FIPA in creating a favourable business environment to attract foreign investment.

The Minister Šarović said that it is necessary that all relevant institutions in BiH starting from the Ministry, FIPA, Chambers of Commerce and the Council of Foreign Investors of BiH work together on improving the business environment and competitiveness of BiH in the coming period, in order to avoid parallel activities of several competent institutions with weak effects, as was the case in previous years.

Weakness and difficulties of the business environment in BiH on whose improvement the competent institutions will work together in 2016 in order to increase foreign investment, to improve the standards of BiH citizens and to economically recover the country.

The Director Milinić pointed out that the work of the Agency in 2016 will be characterized by the search of foreign investors and establishing new contacts with business associations abroad. He also stated that certain Chinese companies are interested in the thermal power plants in Bosnia and Herzegovina, the Japanese are interested in energy projects, wood industry, agriculture and food production, that the Brazilians are interested in agriculture, and that it is working to establish greater cooperation with German and American investors.

Branimir Muidža, President of the Council of Foreign Investors Council in BiH (FIC), said that the political instability, bureaucracy and taxes, non-fiscal charges, time-consuming procedures for issuing certain permits represent obstacles for foreign investors in BiH. He noted an example indicating that he needs to provide 11 permits to open a cement factory in the Corridor Vc, and that issuing od one permit lasts for six months.

He also stated the fact that none of the investors gathered by FIC did not lose his capital in BiH and that a higher number of them is ready to reinvest.

The conclusions of the meeting are as follows:

previous
First Steps towards Establishing Communication between Government and NGO Representatives in FBiH
next
Corporate gathering of the FIC members with the Prime Minister of the Federation of BiH, Mr. Fadil Novalić