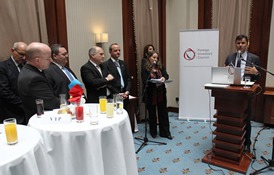 Sarajevo, 24 February 2016 -FIC members and the Prime Minister of the Federation of Bosnia and Herzegovina, Fadil Novalić, held today a corporate gathering at hotel “Europe” in Sarajevo

Based on the Memorandum of Understanding signed between the Federal Government and the FICl in 2011, political actors in the Federation of BiH have been committed to the implementation of the reform process in the areas that are crucial for improvement of business and investment environment in the country. Adoption of the official Reform Agenda as a precondition of socio-economic development and accession to the EU had a positive response in the business community. Members of the FIC gave its confidence to this country and they want to see progress being made in this direction, as well as provide expertise and technical assistance to the authorities in the implementation of reform activities. Therefore, it is important that the decision-making processes and the adoption of the relevant legislation are being more efficient and transparent.

In the presence of numerous high-ranking officials from economic, diplomatic, political and public life of BiH, President of the FIC and Managing Director of Heidelberg Cement Group for BiH, Branimir Muidža, presented on this occasion the most important results of the research which was conducted last year among FIC members, and published in the FIC Barometer.

The guests were also adressed by the Prime Minister of the Federation, Fadil Novalić and German Ambassador in BiH, HE Christian Hellbach.