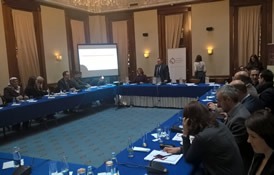 Branimir Muidža re-elected as President of the FIC

Sarajevo, December 14, 2016 – FIC BiH held on Wednesday, the 7th General Assembly in 2016, at which they adopted statements from 2015/2016 and agreed on directions for future action. In addition to the activity report, the Assembly members elected new members of the Board and the President of the FIC. In the election of the President of the FIC, trust was again shown to Branimir Muidža, entrepreneur and CEO of one of the most successful and largest foreign companies in Bosnia and Herzegovina, Kakanj Cement Factory d.d. – Heidelberg Cement Group. To Muidža this is third term of the President of the Council.

Next to Mr. Muidža the new board members are:

Mr. Muidža, after  General Assembly session stated:
“I am extremely pleased that VSI increased the number of members by 50% in the past two years, and today has over 55 members. The fact is that FIC so far established itself as a legitimate partner to the authorities in Bosnia and Herzegovina in implementing reforms and improving the business environment. I believe that we in the next two years can do more for foreign investors in BiH, but also for the very development of Bosnia and Herzegovina. the aim of the FIC this year will be the promotion of concrete measures from our White Book, the focus on reforms that should result in lower burdens at business operations and investment, eliminating administrative barriers and increase foreign direct investment. We expect support to entrepreneurs in BiH, as well as local government institutions, to accelerate reforms in the process of strengthening the BiH economy. The media in all of this have an extremely important role, so we expect and their great support. “

previous
Open call to municipalities from FBIH to join BFC SEE
next
Economic Forum of Bosnia and Herzegovina 2017: Economy is the key and should be a priority