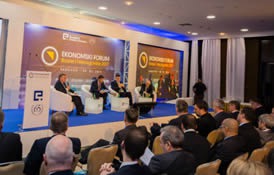 The economy has to be a priority and ahead of politics, it has to be the key to everything, and everything else is a waste of time, it was said today in Sarajevo at the opening of the Economic Forum, which is organized by the Faculty of Economics, University of Sarajevo.

Dean of the Faculty of Economics in Sarajevo, Kemal Kozaric said that the Faculty of Economics finds it necessary to contribute and initiate conversations between representatives from the public and private business sector, including representatives of the academic community. He says that a large number of positive examples of Bosnia and Herzegovina and that the authorities simply have to recognize people from the real sector. Minister of Foreign Trade and Economic Relations Mirko Sarovic said that economic indicators for 2016 are not so bad, although in general the state lags behind the region. He points out that the biggest problem is poor competitiveness, economic freedom and obstacles in business.

Mladen Ivanic, Chairman of the Presidency of Bosnia and Herzegovina, stated that is necessary to make the environment in which is worth to invest, adding that BiH is not so bad because it has a stable currency. “The priority is to create an enabling environment and tax cuts to improve the investment,” says Ivanic. He added that BiH still struggle with high unemployment rate.

Denis Zvizdić, Chairman of the Council of Ministers agrees that reform and modernization is a key factor in solving the problems in Bosnia and Herzegovina. Zvizdić showed the good results from the Reform agenda. He said the level of implemented measures at the state level exceeded 40 %. “Hiring in public sector is stopped. It is implemented significant labour reform that has led to creation of new jobs. Exports from BiH has increased by 4.8 %, reduced the trade deficit, military industry increased by 100 %,” said Zvizdić, adding that special emphasis should be placed on education, competitiveness, and preventing the departure of the workforce.

Speaking about the results of the Sarajevo Canton, Elmedin Konaković, Prime Minister od Canton Sarajevo, said that all the announced reforms have had a good effect. Pointing out that the number of employees in public administration was reduced 800 people, and in the real sector increased by 4,000 new workers. Economic Forum of Bosnia and Herzegovina in 2017 was the first event in our country which gathered in one place representatives of government, business and academic community, for the purpose of improving the economic and business environment in BiH.

Other speakers at the forum were: FBiH Prime Minister Fadil Novalić, Minister of Finance and Treasury of BiH Vjekoslav Bevanda, Minister of Foreign Trade and Economic Relations Mirko Sarovic, Central Bank governor Senad Softic, director of the Directorate for European Integration Edin Dilberović, professors at the Faculty of Economics in Sarajevo, Zlatko Lagumdzija and Dženan Đonlagić, president of the Foreign investors Council in BiH Branimir Muidža, as well as many others.

As stated, this event has multiple values for bh. society, especially due to the fact that for the first time in one place through an open dialogue the government, real and public sector, each from their own point of action, discuss problems and opportunities faced by this, tried to adopt concrete proposals and guidelines that will be made available to the creators of economic policy in BiH.