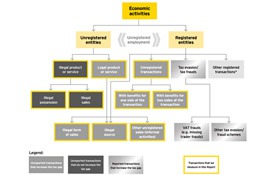 Today in Sarajevo held the constituting meeting of the Working Group of the Shadow Economy under  the Foreign Investors Council BiH(FIC).

Foreign Investors Council of Bosnia and Herzegovina in 2015 initiated a dialogue and started activities to combat the shadow economy not only in BiH but in the entire region, together with our partners: the regional offices of the Foreign Investors Council in Serbia, Croatian, Montenegro, Macedonia and Albania, and the Regional Cooperation Council (RCC). As a result of this cooperation, in May 2015 it was held a large regional conference entitled “Combating Shadow Economy: A Necessity for Investments in SEE” with the participation of the Ministers of Economy and representatives of tax and inspection bodies from across the region, with agreed guidelines for further fight against the shadow economy that prevent further progress of BiH economy.

In accordance with the following activities, the Foreign Investors Council BiH established a permanent Working group of the shadow economy whose primary task will be to work together with relevant state and entity authorities, and other stakeholders, identifying concrete measures and solutions to combat shadow economy in BiH and enforce their implementation based on international standards and practices, and design an action plan which will enable the implementation of these measures and to monitor their progress.