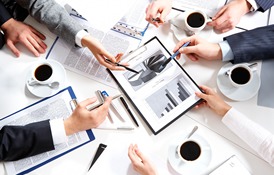 A regular meeting of the Cooperation council quarterly organized by the Foreign Investors Council BiH (FIC) took place on March 22, 2017 in Sarajevo.

Apart from the representatives of the FIC management, the meeting was also attended by the regular members of the Cooperation Council consisting of commercial attachĂ©s of foreign embassies in BiH and representatives of international organisations in BiH. The topic of the meeting was on-going Tax reform in Federation of Bosnia and Herzegovina and adoption of new Law on Personal Income Tax and Law on  Contributions which will significantly affect business sector and citizens of BiH. Key speaker at the meeting was Ms. Mubera Brkovic, FIC board Member and Tax and Legal manager at PwC. Ms. Brkovic briefly introduced the participants with new laws, major amendments comparing to current laws, and effect that those laws will have on the economy and business environment in country.

This topic will remain in the focus of FIC activities in the next period given that the FIC together with other chamber of commerce and associations, and social partners takes part in negotiations with the FBiH Government regarding the final text of the respective laws. Currently these laws are adopted in draft form and will now be in a regular adoption procedure. Therefore, employers will have enough time to suggest amendments and give recommendations to the drafts of the respective laws in order to reach acceptable solution for both employers and workers, but also for the FBiH Government.