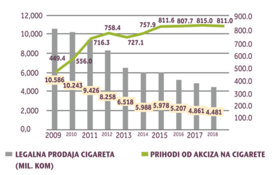 At the beginning of July, the FIC
sent an initiative of the FIC members from the tobacco industry to the
competent BiH institutions in the form of an appeal to suppress the illegal
trade in tobacco products, which increased especially during the COVID-19
pandemic.

FIC addressed a request for
support in resolving certain issues in the segment of illegal tobacco products trade
on the BiH market.

FIC members pointed out that the
already difficult position of the tobacco industry in BiH was further
complicated in the months of the proclamation of the coronavirus pandemic, and
in BiH there was a significant decline in sales of tobacco products on the
legal market. One reason for this is the growing illegal trade activity that is
growing in traditional places of illegal sale as well as online sales.

Currently illegal tobacco trade
in BiH participates with almost 50% of the total tobacco market. Our
members/companies from the tobacco industry have repeatedly reported such
events to the BiH authorities in charge of law enforcement by sending
individual letters and reports.

It is also stated that the
tobacco industry in the name of indirect taxes and VAT in 2019, paid approx.
billion KM, which represents 16% of all indirect taxes paid. Compared to last
year, in May 2020, there was a decrease in excise revenues by more than 60% or
54 million KM. Cumulatively speaking, in 2020, in the period January – May, the
decline in revenue is 8 percent, which is 27 million KM. During the current
year, 2020, the negative trend is expected to continue and the potential
decline in revenues from excise duties on tobacco products in the amount of about
120 million KM. In addition to paying taxes, these companies employ a
significant number of workers whose jobs have been maintained despite a large
drop in income caused by the negative effects of the coronavirus pandemic.

Due to all the above, currently
it is extremely important that state and entity institutions and competent
agencies support the legal market of tobacco products, by maintaining the legal
flow for excise products, which creates wider effects on the following:

§ Cooperation
between the authorities, institutions and industry in the fight against the
black market, a moratorium on excise duties on tobacco products, as well as
continuous raising of citizens’ awareness of crime and illegal tobacco
products, as well as the harmfulness of consumption of uncontrolled products,
will affect the increase in excise revenues on tobacco products.

§ In
order to protect consumers as much as possible, remove the illegal tobacco products
that are not controlled, and are often full of heavy metals, pesticides, nylon
and other substances and as such are extremely dangerous to public health.

§ Ensure
better mechanisms for combating the illegal market, both physical and virtual,
through better cooperation and coordinated work of competent institutions,
which directly affects the security of the above-mentioned goals.