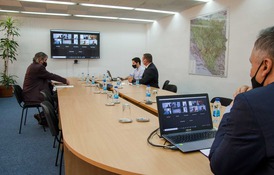 A comprehensive
analytical review of foreign investment in the Federation of BiH in the year of
the projected global recession caused by the COVID-19 pandemic was the main
point of the 7th session of the FBiH Council for Foreign Investors
held on June 24, via a video link at the FBiH Government headquarters in
Sarajevo, chaired by Federal Minister of Trade Zlatan Vujanovic.

What prevailed
in most of the presentations of the Council members is that Bosnia and
Herzegovina in this global crisis, as well as almost all countries in the
world, will record a recession, which will be the largest in recent history.

According to the
data presented by Goran Mirascic, the Council member and advisor to the federal
prime minister, it is estimated that the recession in FBiH will amount to minus
3,2 to 5 percent, and if we take into account that before the pandemic the
planned GDP growth was 2,8 percent, then the amount of the fall would be between
6 and 8 percent.

However, as he
pointed out, every crisis is also a chance for the situation to stabilize and
the economy to recover, primarily by stopping the negative spiral trough
attracting foreign investments and creating a more favorable business
environment.

This primarily
refers to positioning BiH in the strongest European supply chains after those
that exist in Asian and Far Eastern countries are endangered and investors want
to move production to €‹ €‹Eastern and Southeastern Europe regions.

He estimated
that the economy in the Federation of BiH could return to the level from
February this year in next 15 to 18 months.

Stating that the
world economy has shown instability after the corona virus pandemic, President of
Foreign Investors Council in BiH and Council member, Branimir Muidza gave the
example of the Kakanj Cement Factory (Heidelberg Cement Group, which despite
the disruption caused by pandemic, recorded significant production, sales and
exports.

The conclusion
of all participants at the meeting was that despite to all negative effects of
the pandemic, this is a chance for the economy in FBiH to strengthen,
restructure and improve the business environment and adopt the necessary
legislation, to take a position that will allow significant foreign investment
in future.

previous
SHP CELEX: About challenges on supplying market with most wanted product during the corona virus pandemic and the ability to adapt
next
FIC Working Group for Gray Economy sent an initiative for Support in the fight against the illegal market of tobacco products