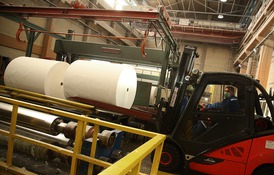 In an interview
for the Banja Luka”s portal Srpska Info, SHP Celex production director Dragana
Obradović and sales manager Mario Blažević talk about the challenges that this
Banja Luka-based company faced due to the enormous demand for toilet paper and
difficult transport, and how to quickly adapt to new situation on market.

Since the beginning
of the corona virus pandemic, toilet paper has become one of the most wanted
items in the entire world. The Banja Luka factory, which is part of the SHP Group
from Slovakia and a member of the Foreign Investors Council in BiH, faced a new
challenge and successfully resisted all obstacles.

Director
Obradović states that during the pandemic, orders increased by almost 50
percent, and the main raw material for production, cellulose,
was procured in Italy until the outbreak of the epidemic. Due to the situation
in that country, they had to find an alternative, and directed the purchase of cellulose
to the Scandinavian countries, Germany and the Netherlands.

Sales manager, Mario
Blažević, explains that during the corona virus outbreak, company was ready  despite enormous demand and difficult
transport due to delays at the borders.

“The ability to
adapt quickly is key to success. It also helped that we were constantly
producing at full capacity, so we had enough stock. However, the most important
thing is that all our workers are healthy, because without good workers there
is no successful company ” – says Blažević.

He also added
that the company is in the process of implementing a significant investment, which
includes the purchase of additional cellulose processing machines, emphasizing
that the health and safety of workers is their absolute priority.

In addition to
caring for workers and all measures taken at the group level to reduce the risk
of infection, they say that SHP Celex, as a socially responsible company, seeks
to support health institutions in Republika Srpska with donations to hospitals
and health centers, because they want to contribute to the fight against the
corona virus.

previous
FIC and dmb Consulting became a partner for Czech exporters in Bosnia and Herzegovina
next
FBiH Council for Foreign Investors held a meeting: Crisis is also a chance for more foreign investment