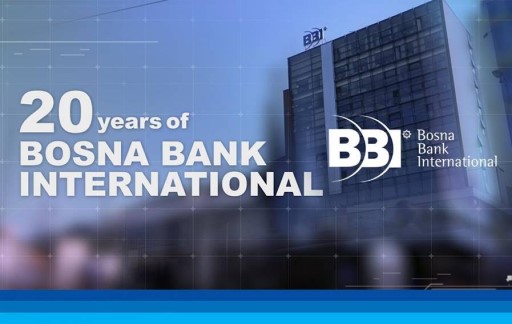 In 2000, in the heart of Southeast Europe, in Bosnia and Herzegovina, a country that leaves no one indifferent and whose state borders are written in the shape of a heart, in its capital, where Eastern and Western cultures have merged for centuries, a completely new and different financial institution – Bosna Bank International – BBI Bank was established. With the establishment of BBI Bank, whose work is harmonized with Islamic principles, a new era of business of the banking sector in Bosnia has begun. For the first time, Bosnian citizens were given the opportunity to choose a different way of banking. Twenty years later, this is one of the most stable and fastest growing banks in Bosnia and Herzegovina with big plans.

BBI Bank was founded by theIslamic Development Bank (IsDB) as the largest shareholder with more than 45 percent ownership,Dubai Islamic Bank (DIB)with a share of 27.27 percent, and Abu Dhabi Islamic Bank (ADIB) with 27.27 percent. In order to harmonize its business with Islamic rules, regulation and principles, a Sharia Committee was established with domestic and world renowned experts in the field of Sharia law.

BBI Bank sucessfuly implemented the concept of Islamic banking into a society that was just transitioning from a socialist to a democratic system and to a free market economy. The Bosnian market, as well as the wider region, at that time did not know the concept of Islamic banking, there was no educated staff, neither there were laws and infrastructure for its introduction. The bank stood by the people and the economy, and the profit came as a result of this orientation, results and the trust gained.

The average annual growth was 18.2%, which positioned Bosna Bank International among the fastest growing banks in the country even though the main competitors were the largest commercial European banking groups. The man who led this fascinating development is BBI’s Chief Executive Officer – Mr. Amer Bukvić.

This is the story of it.