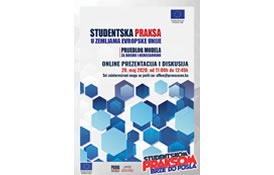 A public promotion and presentation of the study Student Internship in EU Countries – Model Proposal for BiH was held on May 28 in Sarajevo via the online platform. Models of student internship were presented at the promotion, in which creation FIC also participated, as a member of the ERSE network.

FIC became a member of the ERSE (Education, Reform, Security and Existence) network in September last year, which aims to support higher education reform by advocating the introduction of regular student internships, and was formed as part of the EU-funded Student Internship Project. The network consists of representatives of the academic community, business community, student associations and civil society organizations with the aim of introducing regular student internships, which aims to contribute to greater employment and the stay of young people in Bosnia and Herzegovina.

The study, was created as a result of workshops with members of the ERSE network, which were held during the first half of March this year in Sarajevo. Vladimir Pandurević, Programme Manager Civil Society/EIDHR/Culture/Youth atthe Delegation of the European Union to BiH, and Diana Šehić, Director of the NGO “Rights for All”, who are the project leader, addressed the participants with a welcoming speech. The author of the study, Nina Branković, presented at the promotion the proposals of the student internship model that could be applied in BiH, after which a discussion was held with the participants.