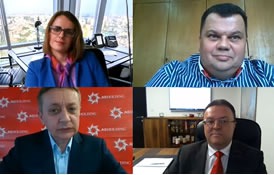 The organizer of the Sarajevo Business Forum (SBF), the leading investment conference in Southeast Europe – Bosna Bank International (BBI) – held the fourth in a series of online panels on the sustainability of the BiH economy in times of crisis. The topic of the fourth SBF online session was “Strengthening the capacity of agriculture and the food sector in Bosnia and Herzegovina”, moderated by Dr. Elma Agić-Šabeta, Director of the Risk Control Department at BBI Bank.

The panelists were key people from the BiH food industry: Rusmir Hrvić, President of the Management Board, AS Holding, and representatives of FIC members, Ilija Studen, President of Studen Holding and Benjamin Vukotić, General Manager of Zeraa Agriculture Investment.

The panelists, among other things, discussed how BiH can reduce the deficit of two billion KM of food imports in BiH? What should we do to harness agricultural potential across the country? What activities are a priority in order to increase domestic production and replace imports with higher consumption of domestic products? What role should public institutions, private companies, small and medium enterprises play in all this, and what should public and private media and the citizens themselves do?

Each state should produce the amount of food consumed within its borders. Also, it is necessary to make a redistribution of products that can realistically be produced in our country. For example, we cannot produce coffee, but we can produce sufficient quantities of water even for export; then meat, it is illogical for BiH to import meat, we must develop livestock to export meat. An additional division is needed to see where we can be competitors and where not, which is a prerequisite for further steps.

Another example is salt, and there is already good production, while the example of wheat is the opposite, i.e. production is neglected even though BiH has good potentials in this branch.

“One of the problems we face in food production is that the opinion now prevails that the poorest layers of the population are engaged in agriculture. We have to change that way of thinking. Agriculture needs a lot of investment and the risks are huge. This crisis has shown us that we need to change the current situation“, says Hrvić, adding that it is estimated that the utilization of the capacity of the food industry in BiH is currently less than 50 percent of the potential. Hrvić points out that in order to increase these capacities, investments in technology and marketing are needed, and especially greater cooperation between producers and traders – vertical integration.

The President of Studen Holding, Ilija Studen, points out that the SBF project to offer solutions for the economy in times of crisis is excellent and the initiatives for overcoming the economic crisis have gladly responded.

“We should first determine which is the strategic industry, which is the industry that needs to be developed, and which is the industry that the state needs to help. We at Studen Holding 17 years ago were looking to invest in oil production in this area, where the climate for agriculture is good. There was an old factory in Brcko that did not work – Bimal – through the process of privatization and renovation, we started production. However, no one in the country cared about whether we had enough raw materials for production. While Croatia and Serbia take care of their producers, this is not the case with us. We have found a solution through the raw material base of the region, but I believe that we in BiH can start the production of oilseeds and have our own resources,” said Studen.

Agriculture in European countries is one of the key branches approached with a state-level strategy, which includes subsidies, customs duties and other benefits. Until now, strong competition of international corporations has been in force in BiH due to the lack of an adequate customs policy, and in that way domestic producers were completely unprotected.

“The situation is similar with sugar production. In Brcko, there are capacities for oil and sugar production, and in the coming period we should focus on growing oilseeds to provide our own raw materials,” said Studen, adding that agricultural production and BiH should also focus on economic production of cereals (wheat, corn), through strategy of adequate subsidies, increase of agricultural areas, and the impact on increasing customer awareness of consuming domestic products.

In the production of fruits and vegetables, BiH has a deficit of 230 million. How to change this situation?

“There must be a strategic approach at the state level towards certain industries. There are subsidies, but it seems like a very bad division, without a strategy, without defining what we need to produce and where we are competitors. It is important to give support to subcontractors, those who produce raw materials, any state support must be coordinated with sellers – only then can a serious effect be counted on”, explains Benjamin Vukotić, General Manager, Zeraa Agriculture Investment, a company that arrived in BiH through the Sarajevo Business Forum, Zeraa is the owner of Brčko”s Bosnaplod, and behind which stands one of the strongest investors in the world.

Vukotić emphasizes that agriculture is a long-term process, it takes up to ten years of investment to achieve results, and that it is important to work on developing cooperative production and raising the level of cooperation with subcontractors to a higher level.

“A real state strategy is needed, by stimulating the producers and the banking sector. Although BiH is a small country, 50 percent of arable land has not been sown,” Vukotić said.

The panelists concluded that a clear state strategy is needed to strengthen the capacity of agricultural production, which will define which are the key and strategic products for our country. Also, all stakeholders in this area should work intensively on increasing existing production capacities, starting primary production and training purchase stations for small producers.

previous
Branimir Muidza on the consequences of COVID-19: Eliminate the negative economic consequences of a pandemic by abolishing parafiscal levies
next
Study "Student internship in European Union countries - Model proposal for BiH" presented to the public