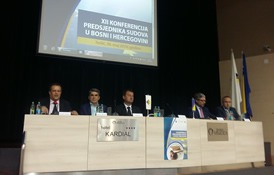 Representatives of Foreign Investors Council (FIC) took part at the XII Conference of Presidents of Courts in Bosnia and Herzegovina held on 30 May 2016 in Teslic.

Member of the FIC Board, attorney at law Stevan Dimitrijevic together with attorney at law Jasmin Saric presented to presidents of courts and representatives of the High Judicial and Prosecutorial Council (HJPC) key recommendations in the area of “Rule of Law €ť which will be found in the new edition of the White Book for 2015/16 year. Special emphasis at the conference was put on efficiency, quality and measures to improve judicial efficiency, accountability and integrity of the judiciary, as FIC repeatedly suggested to be one of key obstacles to foreign investors in Bosnia and Herzegovina.
The conference adopted a number of conclusions concerning the efficiency, quality and measures to improve efficiency of the judiciary, as well as the accountability and integrity of the judiciary. Certain conclusions apply to the institution of court settlement, which states that, in accordance with the obligations set out in strategy documents for the judiciary, the courts actively promote court settlement as an effective way of resolving disputes. Participation of representatives of the FIC at this conference is an expression of closer cooperation established between FIC and HJPC.
previous
FIC representatives took part at the panel discussion with "COWEB' Committee of EU Member State diplomats
next
Cement Plant Kakanj celebrate the World Environment Day