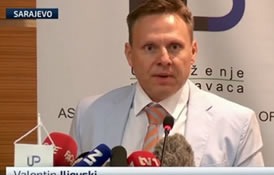 FBiH Employers Association, Union of Independent Trade Unions of BiH,
BiH Foreign Trade Chamber, Foreign Investors Council of BiH, FBiH
Chamber of Commerce and FIPA today organized a press conference
regarding the recent amendments to the Rulebook on the Implementation of
the FBiH Income Tax Law.

“Any amendment to the tax legislation had to be at least neutral, or reduce contributions equivalently to the insured financial funds,” said Ilievski.

He also mentioned that it is unusual to adopt new tax rules in the middle of the financial year, and asked where is the announced contributions reduction.

“This measure is intended only for filling the state budget at the expense of employers and workers, and not on contributions reduction. In this situation, the companies will have more unplanned costs or expenses which are not budgeted for this finacial year. Companies will become uncompetitive, and will reduce planned investments or the number of workers,” added Ilievski.

He also explained what this government’s decision will ultimately bring.

“Introducing this burdens will weak purchasing power of citizens and the loss will be felt by both employers and workers, because consumption will drop. Finally, the biggest loss will experience the state and its budget. We urge the government to postpone the application of this Rulebook until the contributions reduction.”