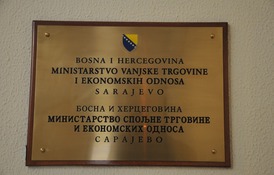 In October, the Executive Director of FIC Sanja Miovčić held a meeting with the Minister of Foreign Trade and Economic Relations of BiH, Mr. Staša Košarac. The topic of the meeting was the improvement of the investment climate and the implementation of current investment projects in BiH, as well as ways to strengthen cooperation between the Council of Foreign Investors and the Ministry in areas of interest to foreign investors in the country.
The meeting also discussed current open issues such as: licenses for emergency import of medicines, blockade of the FBiH Securities Commission, simplification of border-crossing pass for foreigners in managerial positions in BiH, controversial provisions of the Law on Consumer Protection and many other issues, which are crucial for the efficient operation of foreign investors and which require priority solutions to enable normal and easier operations of foreign companies and the inflow of new investments in BiH, that will ensure significant economic growth and better standards of BiH citizens.

previous
FIC participated in the World Bank's focus group on the impact of COVID on resolving commercial disputes
next
Muidža explains for Akta.ba what the new EU rules on foreign investments bring