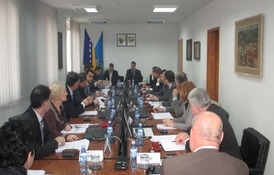 Prospects and potentials for attracting new development and existing foreign investment, and the problems and difficulties that foreign investors in Bosnia and Herzegovina encountered were the topics at the meeting with Prime Minister of Tuzla Canton Bahrija Umihanić and representatives of the Foreign Investors Council BiH – FIC, representatives of the USAID and City of Tuzla.

FIC had similar meetings in other cantons and a common problems in doing business for investors are administrative barriers, obtaining necessary permits, political and legal uncertainty, division of competencies between different levels of government and the Tax laws that narrow the space for business development.

“We are pleased to hear that this Government has done Development Strategy, the Register of administrative procedures and Guide for foreign investors, and considered the recommendations from the White Book 2012-2013. The recommendations can still be taken as a guide in the reform process and also for the Government to come.” said Executive Director of Foreign Investors Bojana Skrobic Omerovic.
Representatives of foreign investors, Xella BH and Sisecam Soda took the opportunity to praise the work, commitment and support of the Government of Tuzla Canton to foreign investors, but also present some major problems that concern them.

“Given that most of these problems and concerns must be addressed at the federal and state levels of government, we are confident that the Government of Tuzla Canton in communication with other levels of government will do the best to get certain things to change.” said Director of Xella BH Emir Kadrić.
In the coming period, and the city government of the City of Tuzla has set a big shift in work and great dedication to businessmen and investors.

“We have appointed a specific person to be responsible for the support and assistance to investors, we will record and as soon as possible solve all the problems. During our recent visit to the investors we have seen that there is a lot of legislation that should be changed at the federal level in order to provide our investors a little better working conditions”, said Vedran Lakic, head of the department for development, entrepreneurship and social activities in the City of Tuzla.
Tuzla Canton still have visible consequences of bad privatization, constant protests of workers, which largely prevents the entry of foreign investment.

“I sincerely hope that these aggravating factors will soon disappear and we will have a more favourable situation.” said Prime Minister Umihanić. He concluded that Government of Tuzla Canton will made efforts to change Cantonal legislation. “We have also sent a large number of initiatives and proposals for amendments to the regulations at the federal level. A number of obstacles that we have been removed, and those that are still current will be identified and presented to follow up sessions of the Government which I hope will continue to work to eliminate them.”