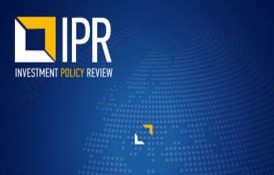 United Nations Conference on Trade and Development (UNCTAD) will hold the  intergovernmental presentation of the Investment Policy Review (IPR) of South-East Europe, on 21 November 2017, in Geneva, Switzerland.

The presentation will take place within the context of the ninth session of the UNCTAD Investment, Enterprise and Development Commission, scheduled from 20-24 November 2017 in Palais des Nationes, Geneva, Switzerland.

The event will provide a platform for the economies of South-East Europe to highlight progress on investment policy reform and cooperation as well as facilitate an exchange of best practices with the member States of UNCTAD, including development partners. This event will also be an opportunity to showcase South-East Europe as an investment destination to a selected group of international investors.

During the event, participants will also have the possibility to learn about the implementation of the IPR recommendations, which is part of a follow-up project championed by the Regional Cooperation Council (RCC). This project will benefit from the financial support of the European Commission and the technical assistance of the World Bank.

A copy of the IPR of South-East Europe, the first regional review conducted by UNCTAD, can be downloaded from the following webpage: www.unctad.org/ipr.