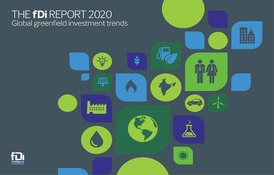 Official data of the Central Bank
of BiH (CBBH) on the state and flows of foreign direct investment (FDI) in BiH
on an annual basis are published eight months after the end of the reporting
year. During the year, provisional, quarterly data are published within FDI and
balance of payments flows (with the estimated amount of retained earnings). In
addition to the publication of official annual data, previously published data
for previous years are revised. This year, the Central Bank, due to known,
extraordinary circumstances, is late with the publication of new data on FDI,
and the information was prepared in accordance with, at this moment, available
data on foreign direct investment in BiH, which are:

§ Preliminary
data for the first quarter of 2020

According to estimates and
announcements of relevant international organizations, foreign direct
investment in the coming period (2020/2021) would have a decline of up to 40%
globally, which will certainly have a negative impact on the inflow of foreign
direct investment in BiH.

In July 2020, the Central Bank of
BiH published the “Annual Report for 2019” stating that the inflow on
the basis of foreign direct investment in 2019 amounted to KM 939.4 million or
EUR 480.3 million (within the balance of payments), and there was an increase
in inflows by 12.1% on an annual basis. Although a significant increase was
recorded, foreign direct investment in the previous year remained far below the
level of inflows recorded in the period before the financial crisis. Until the
publication of the official data of the CBBH for 2019, for more detailed
analyzes of foreign direct investment (by countries, investment activities, components),
the available preliminary data for FDI flows in the period January – September
2019 are used. Foreign direct investments in this period amounted to KM 861.1
million or EUR 440.3 million and were higher by 29.0% compared to the same
period last year, noting that preliminary data are subject to subsequent
audits.

Activities (NACE Rev.2) within
which the most FDI (over 50 million KM) were registered in BiH, for the first
nine months of 2019 are: Financial service activities, except insurance and
pension funds (195.0 million KM), Wholesale except trade of motor vehicles and
motorcycles (72.6 million KM), Production and supply of electricity, gas, steam
and air conditioning (52.2 million KM)

Considering that in accordance
with statistical practice, in addition to the publication of annual data,
revised amounts for previous years can be expected, so the indicators of
increasing foreign investment can be revised, but currently represent a
positive indicator. Based on currently available preliminary data, both in the
balance of payments and in FDI flows, it is expected that 2019 will be the most
successful in the previous ten-year period in terms of total FDI, assuming that
the final data of the Central Bank of BiH do not bring significant changes and
negative surprises.

According
to the total amounts, as of December 2018, the countries that have invested the
most in BiH are: Austria, Croatia, Serbia and Slovenia. In the total state of
FDI in the period May 1994 – December 2018, most foreign capital was invested
in the production of 34%, the banking sector 25% and telecommunications 12%.