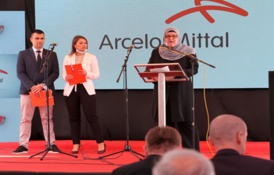 On September 23, the company
ArcelorMittal Zenica officially announced the completion of two very important environmental protection projects at the plants of the agglomeration and steel, with a total value of more than 15 million KM. The environmental protection project in Zenica included the construction of a second hybrid filter on the SM-6 in the agglomeration and secondary dedusting at the convector Steelworks, which will give the citizens of Zenica a better environment, and the company ArcelorMittal Zenica met the requirements of the environmental permit.

General Manager of ArcelorMittal
Zenica, Nikhil Mehta explained that these filters will cover all diffuse missions that have an extremely large impact on the citizens of Zenica.

“We have spent more than 20 million KM on these projects, but in the future, we will ensure that Mittal workers and the citizens of Zenica have a better environment. With the heating plant, we will have three completed projects which will, I hope, meet all the requirements of the environmental permit. This is a big step for ArcelorMittal Zenica. Thanks go to all the citizens of Zenica and the institutions that supported us, but also to the local communities. Steel production in Zenica has been going on for 130 years and I am sure that it will continue in the future”,said Mehta.

Azra Sivro from the ecology sector of the company ArcelorMittal Zenica said that they had numerous difficulties in the realization of the project, but that other projects will be completed by the end of the year and that soon the citizens of Zenica will not see shows from steel plant. Mateo Tomic, on behalf of the company Ekoplant, which performed the works on the project, said in his address to the audience that he had been on the construction site since 2018 and that in these two years they had been working on the realization of a very important project.