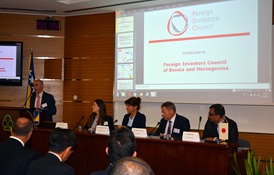 Foreign Trade Chamber of BiH in cooperation with the Japan External Trade Organization (JETRO  Wien), Embassy of Japan in BiH and the Foreign Investment Promotion Agency of BiH organized the visit of the Japanese business delegation to BiH.

The aim of the visit was a possibility of development of business relations with Bosnia & Herzegovina. President of the BiH Foreign Trade Chamber Bruno Bojic said that  BiH continuously improving the business environment, adding that BiH is currently the country with the best business environment in the region. On this occasion representatives of the Foreign Investors Council of BiH – (FIC), Ms. Sanja Miovčić Executive Director and members of the FIC BoD, Ms. Sandra Kasalo Fazlic, Mr. Valentin Ilievski and Mr. Biju Nair informed Japanese businessmen with business opportunities in BiH and positive experiences of foreign investors which operating in BiH for many years.

This meeting is considered particularly important because foreign trade of BiH with Japan is not great and it is approximately 10 million. Ambassador of Japan to BiH H.E. Kazuya Ogawa said that BiH has a lot of potential, in terms of the energy and manufacturing sectors, as well as in agriculture and that should work on increasing foreign trade. “I am very happy that JETRO and VTK BiH organized today a joint event. I think many Japanese businessmen not have overly positive perception of BiH. This will be a good opportunity to convince them otherwise,” said Ogawa. He concluded that some Japanese firms are already present in the country and announced expansion of this cooperation and major investments.

From JETRO have said they are glad that they are in Sarajevo with 18 people from 13 companies that have come from Japan. They pointed out that the purpose of the mission to obtain accurate information as far as the business environment in BiH attractive. They add that advantage of BiH good access to the European market, as well as relatively cheap labour force and low taxes.

previous
Training on Transfer Pricing
next
Miovčić: BiH has to support development of small and medium enterprises