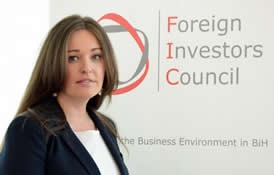 Despite negative indicators such as political instability, corruption, lack of enforcement of court decisions, high unemployment and a shortage of skilled labor, the fact is that Bosnia and Herzegovina with its potentials provides sufficient conditions for the successful operation of companies.

In the future we expect reform in the areas of corporate law in line with EU standards and requirements of the global market, adoption of an adequate legislative framework in the field of concessions and public-private partnerships, changes in tax policy to encourage the growth of the real sector, and finally the activities to strengthen the rule of law, said the Executive Director of the Foreign Investors Council (FIC) of Bosnia and Herzegovina Sanja Miovčić in an interview with FENA. She points out that according to available reports from the Central Bank, the Agency for Statistics of Bosnia and Herzegovina, as well as quarterly economic reports of the Research and Consulting Department of Raiffeisen Bank, BiH is recording economic growth and progress. “In the next three years, it is expected that BiH will continue with positive trends and remain on the path of continued economic recovery. The conditions for this scenario are a continuation of structural reforms and attracting investments based on political stability of the country, €ť says Miovčić.

The examples and success stories of foreign investors confirm that Bosnia and Herzegovina is a favorable destination for foreign investment, and that we should be optimistic in this regard in the coming period. Expectations of an increase in the level of foreign investments are based primarily on further implementation of structural reforms, getting closer to becoming European Union member, the possibilities for investment, planned privatization of strategic companies, expressed interest of potential investors, as well as projects that are being implemented. When asked what the biggest problems are of foreign investors who want to invest their capital in Bosnia and Herzegovina, the answer is a complex organization and the way of the functioning of the state. “Political, economic, administrative, legal and other divisions, lack of harmonization of tax policy between different levels, inconsistency in the application of a number of administrative procedures at various levels of government, too long and complicated procedures for obtaining necessary permits and other issues to which the Foreign Investors Council has regularly indicated in its edition “White Book” since 2006.

The predictability of the tax framework and political stability are of paramount importance, both for the potential, as well as for investors that are already present in the country €ť says Miovčić. Some local communities have successfully attracted foreign investments, and there are many positive examples. “Successful examples in attracting investments that have promoted the success of the local communities are Tešanj, Kakanj, Goražde, Žepće, Gračanica, Teslić, Brčko, Bijeljina and in some other parts of the country. The fact that the attitude of local authorities towards the realization of business ideas has significantly changed and shows excellent results, and that there more good examples that show this, is certainly encouraging and is an example of good practice for other local governments in BiH. Most of the items from the reform program, she says, coincides with areas that the Foreign Investors Council processed in the new, the 6th edition of the “White Book”, which is the result of coordinated cooperation between the Council and the institutions at all levels of government. “Our goal is to work together and in synergy and to implement the goals of the Reform Agenda to the satisfaction of all stakeholders, and especially the citizens, the real sector and the authorities in Bosnia and Herzegovina, €ť stated Miovčić in an interview with FENA.