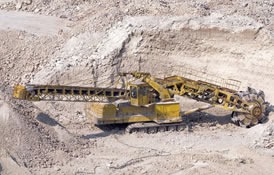 Eastern Mining Company, which will open a lead, zinc and barite mine in next two years, will move completely to Vareš by the end of this year. According to the director of the company, Miloš Bošnjaković, Eastern Mining is registered in Sarajevo.

“However, in the meantime, we have registered a branch in Vareš. Our goal was that the tax we pay for our workers ends up in the Zenica-Doboj Canton, i.e. in the municipality of Vareš. I can say with certainty that during 2020, all our business will be transferred to Vareš because this is a Vareš project and I think that the name should stand – the company Eastern Mining with its headquarters in Vareš”, said director Bošnjaković.

He pointed out that the company Eastern Mining is working intensively to obtain all permits for the opening of the mine, which, in addition to these metals, according to research, contains significant amounts of gold and silver.

Precondition for this are reaserch activities in the concession area. The seriousness of this project is shown by the fact that company is currently in the phase of obtaining additional permits for the expansion of the concession area. From the company said that, if all things go at this pace, the mine will be open in 2022.

The mine itself should employ more than 300 workers, while the number of those who will indirectly get a job by opening it will be significantly higher.

Adriatic Metals, which also includes Eastern Mining, estimated the net value of the metal in Vareš at 916 milion USD.

It is announced that the exploitation will last for about 15 years, from 2022 to 2037. This means that the average net profit will be one hundred million KM per year.

The concession fee will significantly contribute to the infrastructure of Zenica-Doboj Canton and Vareš as well.

previous
The Lukavac Cement Factory presents a film about alternative fuels
next
SBF 2020 Online Sessions: "Sustainability of BiH economy in times of crisis"