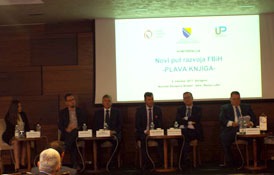 The purpose of the conference is to present to the BiH public a Blue Book draft to the BiH public, a kind of compilation of concrete measures that the FBiH Government should undertake in order to create a new growth model for the Federation of BiH. The authors of Blue Book are members of the FBiH Government’s Economic Council. Blue Book was also written by representatives of the Foreign Investors Council of BiH, FBiH Employers’ Association and the FBiH Economic Development Institute, who have dealt with different areas such as: creating a favorable business environment, a strategy for attracting foreign investment, and issues of unemployment, public spending, fiscal policy and state-owned enterprises.

Conference introductors were H.E. Christiane Hohmann, Ambassador of the Federal Republic of Germany to BiH, and Matthew Lawson, Deputy Chief of Mission of the British Embassy in BiH, who stressed that the Blue Book would serve to FBiH authorities to re-launch and accelerate the economic reform process.

President of the Economic Council of the FBiH Government, dr. sc. Vjekoslav Domljan initially presented the Blue Book draft, pointing out that the Blue Book points to the path that the Federation of BiH must undergo to become a high income economy. The importance of Blue Book is that it points to the problem of invasion into the trap of structural transformation and how to avoid that trap.

Throughout the panel, the present guests had the opportunity to comment and suggest and opened the discussion and took the final standpoint that will serve the authors of the Blue Book to finalize their contributions, and the FBiH Government will serve as input in developing a 2018 economic policy document.