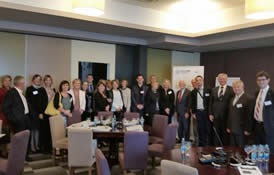 From September 20-21, in coordination with the Centers for Judicial and Prosecutorial Training of the Republika Srpska (RS) and the Federation of Bosnia and Herzegovina (FBiH), CLDP conducted a workshop on international sales contract enforcement in Doboj, Bosnia and Herzegovina (BiH). Participants included approximately 25 judges from both the RS and the FBiH (the two government entities of BiH).

The workshop aimed to increase the capacity of judges to effectively adjudicate international commercial disputes. Senior US District Judge Jed Rakoff of the Southern District of New York and Professor Peter Winship of the Dedman School of Law at Southern Methodist University discussed issues in the adjudication of cross-border disputes such as recognizing choice of law and conflict of laws and applying international treaties and conventions.

The workshop also intended to raise participants’ awareness of arbitration and other means of alternative dispute resolution. It featured presentations on alternative dispute resolution from representatives of the Foreign Trade Chamber of BiH and the Foreign Investors Council, and the judges participated in an interactive case study on enforcement of arbitral awards. Building on CLDP’s training on the adjudication of bankruptcy cases in June 2017, this event is part of a series of workshops intended to build the capacity of the judiciary in BiH to handle commercial cases.

This increased capacity will produce the predictable and uniform decisions necessary to attract foreign investment and encourage entrepreneurship, and will level the playing field for US companies looking to do business in BiH.

previous
High level of stability: EOS gets another 'A' rating
next
Conference "New Development Path of FBiH - Blue Book" was held in Sarajevo