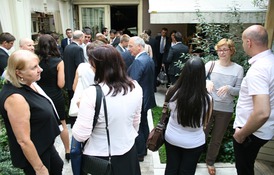 At the summer corporate meeting which was organised by German Chamber of Commerce in BiH (AHK) and the Foreign Investors Council in BiH on June 12, 2015 in Sarajevo, at the restaurant “4 sobe gospođe Safije”, failure to sign the reform agenda was deprecated, in which the political actors in Bosnia and Herzegovina previously committed as part of the German-British initiative.

In the presence of numerous high-ranking guests from economic, diplomatic, political and public life, Ambassador of Germany to BiH, Christian Hellbach, stressed: “The political actors of the country should be aware that the EU has made this initiative as a step towards this country and that there is no alternative to resolute economic and social reforms.” In his view, the failure to adopt the reform agenda would not have passed without consequences for the further development and approximation to the EU integration of the country, but would primarily threatened by worsening economic and social situation and the crisis of public budgets. The FBiH Prime Minister Fadil Novalić is also outlined the importance of reforms in his speech. Member of the FIC Board of Directors and the head of the EBRD office, Ian Brown, said that this event is another in a series of efforts that BiH is positioning itself as a country in which foreign investment is welcome and that all activities of Foreign Investors Council aimed to improve the business climate in BiH.

“We as representatives of foreign companies present in BiH, who gave our trust to this country, are eager to see improvement in this direction. Path to EU is extremely important in term that all legislation and decision making processes will be more efficient and transparent – which leads to stable politics and strong economic growth. With partners such as AHK and other relevant and transparent associations, we believe we can be good allies to reforms to the authorities in Bosnia and Herzegovina”, said Brown in his speech.

The director of the German Chamber of Commerce in BiH, Gunther Neubert, presented on this occasion the most important results of the research conducted by AHK BiH annually among its members. “Although the general economic situation in the country, almost all respondents describe as bad, most of them are satisfied with their own business situation, including that the majority of the respondents planning to invest and create more jobs”, said Neubert, adding that the study showed that the exports of great importance for the companies, with 88% of all respondents considering the German market important or extremely important. Neubert also referred to the Balkans-sourcing conference in Munich, which recently met 23 industrial buyers from Germany, and 96 suppliers from the Balkans. He said that the Balkan-vendor market became more important for German customers in recent years, because of price advantages and technical level of suppliers and that he expects that will soon arise concrete cooperation from these B2B conversation.