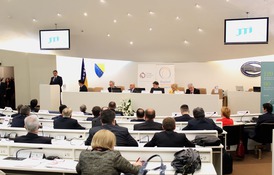 The representatives of the business community and the public sector institutions – ministers of finance, trade, economy, and directors of taxation and customs administrations from 7 regional economies, gathered on April 28th in Sarajevo at the first regional conference titled Combating Shadow Economy: A Necessity for Investments in South East Europe.

The conference is organised by the Regional Cooperation Council (RCC) and Foreign Investors Council BiH (FIC BiH) under the patronage of the Council of Ministers of Bosnia and Herzegovina. The key issues and topics to be addressed at the conference are the long-term effects on the economy and options for market control and protection through efficient and fair tax and customs policies, as well as labour and market policies.

The conference was opened by the Chairman of the Council of Ministers of BiH Denis Zvizdić.

‘Each country has its own programmes and policies to supress shadow economy, which bring improvements, to a certain extent. However, we are still far from the standards of efficient economy so I will be pleased to see this conference serve as a model for what has to be, without delay, developed by Bosnia and Herzegovina – national plan for combating shadow economy. The Government, which I chair, will be committed to combat shadow economy and I use the opportunity to stress that we will have zero tolerance for any form of shadow economy. We hope to have support of business sector, public and international institutions and I invite you to support the Ministry of Finance and Treasury BiH in its endeavours to develop the plan to better govern this issue in Bosnia and Herzegovina”, emphasised the Chairman in his opening speech.

The shadow economy is recognised as one of the biggest challenges for economic growth in Southeast Europe. The annual loss suffered by gross domestic product, in average, exceeds 30%, in all countries in the region, according to estimates of experts.

‘It is important to have with us business people and representatives of business sector today, because they are the one affected the most by the problems. Shadow economy may pose a serious obstacle to regional development if not timely suppressed. Today’s conference is the first in the series of events organised to launch the cooperation between the authorities and business sector representatives, which aims to identify the common solutions. Until the end of the day, we will agree a common position on how to move things forward. I believe that, by doing so, we will fulfil the purpose of this meeting, and that this common position will provide a foundation for our joint efforts €ť, said Secretary General of the Regional Cooperation Council, Goran Svilanović.

The conference aims to create a platform for cooperation to supress shadow economy and establish the mechanism in the form of regular annual meetings between all key actors. The conference will provide an opportunity to agree the agenda for combating shadow economy – one of the major obstacles for development of business sector and better climate for foreign investments in Southeast Europe.

‘To fight the shadow economy is, essentially, to fight for the economy. All companies, be it small, medium or large, suffer its detrimental effects. This is a global problem and we gathered at this conference to exchange our experiences. We want sanctions for those who do not comply with the law, and we want to remove administrative barriers for investments. When investor learns that obtaining the permit requires 180 days, he simply turns and leaves. Implementation of the recommendations we offered would narrow down the opportunities for corruption”, said Branimir Muidža, President of the Foreign Investors Council BiH, in his opening speech.

Agendas of the Regional Cooperation Council (RCC) and Foreign Investors Council BiH (FICBiH), which are supported by the documents South East Europe 2020 Strategy (Strategija Jugoistočne Evrope 2020) (SEE 2020) of RCC and White Book (Bijele knjige) of FIC, reiterate the need for cooperation between the government institutions and business community to create sound business environment and to protect all actors in business processes – employers and employees, and consequently, to protect the state as the foundation of social and economic security.

‘We call for all governments to combat the shadow economy. I would reiterate the need to strengthen coordination between the countries represented at this conference. It is obvious that all institutions and agencies represented here face the similar challenges and I believe that regional states may easily find solutions to address the issue of shadow economy”, said Goran Pekez, Corporate Affairs Director for Adriatic region, Japan Tobacco International.

The participants of the conference were ministers of finance, trade, or economic relations, and directors of taxation and customs administrations from seven regional economies: Albania, Bosnia and Herzegovina, Croatia, Kosovo, Montenegro, Serbia and the Former Yugoslav Republic of Macedonia.

previous
Open forum on the topic 'The system of collection and taxation of services for protection of intellectual property, digital contents and telecommunication services in Bosnia and Herzegovina €ť
next
At the corporate meeting of the German Chamber of Commerce in BiH (AHK) and the Foreign Investors Council in BiH (FIC) underlined the necessity of implementing economic reforms