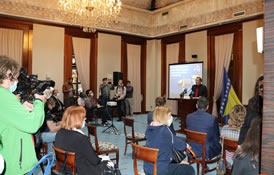 At today’s press conference held in Sarajevo, the Guidelines of the strategic initiative for self-sustainability of domestic production and strengthening of the BiH economy, symbolically called “We can do it”, were presented, which indicates the need to reposition domestic economy to be more resistant to external shocks.

A document with key guidelines that seeks to give a positive momentum to the economy of Bosnia and Herzegovina with a focus on a self-sustaining economy, and to overcoming COVID-19 negative impact on economy, was developed on a volunteer basis by a group of domestic experts from various fields gathered around the Sarajevo Business Forum (SBF) platform

“BBI Bank is committed to the development of BiH and that is our strategic goal. Faced with the corona virus pandemic, we initiated SBF online sessions and panels to find solutions for a self-sustaining economy. 22 experts from the business and economic sector gathered around this initiative, tried to contribute and identify measures that could stabilize the economy, because the corona virus pandemic showed that we can only rely on our own resources when all economies are closed. The document, which contains more than 100 measures, offers concrete solutions that should be implemented to strengthen our economy.

Concrete measures imply that public companies that own 40% of the total tangible assets in the BiH should consolidate their management, i.e. be ‘under one roof’.

It is very important to develop innovations by supporting start-ups, and to raise awareness of the benefits of consuming domestic products through a massive public education media campaign.
Among the concrete measures is also the development of the digital economy, by the integration of small and medium-sized domestic companies through an online platform for placement in the domestic and foreign markets.

It was also proposed to form a unit for support of large investments, where investors could get all the necessary permits to work and start a business in one place.

Also, one of the measures is the launch of an action plan for the relocation of factories from China to BiH and the region, in order to facilitate placement on European markets. This would lead to an increase in employment of the local population “, said Amer Bukvić, President of the Management Board of Bosna Bank International (BBI) and organizer of SBF, who is one of the authors of this document and the initiator.

According to the authors of the initiative, overcoming the crisis caused by the coronavirus pandemic and achieving a higher level of self-sustainability of the BiH economy can be achieved only through public-private partnerships in three key industries, i.e. development and investment in agriculture and food production, pharmaceuticals and renewable energy sector.

“The fact that the food production sector in BiH, which includes the food, retail and agricultural sectors, records a two billion KM trade deficit speaks about the gravity of the situation. The corona virus pandemic has shown that the food sector has responded well to the challenges, and in just a few days BiH has faced minor shortages. The core of the problem is in the segment of agriculture, which is a social category in BiH, which is not the case in EU countries where everyone is committed to cultivating every inch of land.

In food production that can support more other industries, concrete steps need to be taken. Vertical integration is needed to create a stable field-to-table system. Each 1 KM produced in BiH gives a great effect on the domestic standard “, said the President of the Management Board of AS Holding, Rusmir Hrvić, talking about the urgent measures that need to be implemented in order for BiH to strengthen its own food production.

Among the key principles that define the new economic vision and development model for BiH is the consistent application of existing laws and the creation of new normative solutions that will affect the development of the domestic pharmaceutical industry.

“In the last five years, two and a half billion KM went from the domestic market of medicines to foreign producers, of which one billion and 250 million KM is spent by various state funds from which medicines for essential lists are procured, and which are mostly filled by domestic producers. About 80 percent of the domestic medicine market is held by foreign companies. It is absurd that the laws prefer to buy domestic products for essential lists, but they are poorly or not implemented at all, unlike all world markets, including the EU, but also our region, which use these solutions in full capacity, and prefer domestic production wherever it is possible, especially in these new circumstances.

As part of this initiative, we ask all authorities in BiH to maximize the practical application of existing legislation, but also to create new regulations that will ensure the development of the domestic pharmaceutical industry and other sectors as the best response to the consequences of the pandemic. In this regard, the initiative advocates the adoption of the Law on the Development of Strategic Industries, the creation and import of supply chains, which would significantly reduce dependence on imports and thus increase employment and retention of young people within BiH. It is time to accept the fact that the only thing we can unconditionally rely on is domestic production,” said Nedim Uzunovic, CEO of Bosnalijek.

Experts pointed out that is neccecery to provide higher support for the development of new businesses, creating the conditions for building efficient production clusters in the food sector, and digitalization, including support for start-up businesses.

“The corona virus pandemic is the trigger of the crisis that followed in the BiH economy, but not its cause. We were naive when we focused on the development of small and medium enterprises and forgot that large corporations are the engine of their development. The development of innovations and creative new solutions can protect the domestic economy from shocks,” said Zoran Puljic, Director of the Mozaik Foundation, emphasizing the importance of innovation and digital technologies in overcoming the crisis.

Special emphasis was placed on substituting food imports and strengthening domestic production in order to avoid various risks for the BiH economy and citizens in general.

“Bosnia and Herzegovina is among the countries with significant production of oil and sugar, which are basic food products. Domestic production is our primary driver of sustainable economy. However, it requires systemic changes that protect the domestic food industry, protect our farmers and all in the production chain, with adequate relief from bureaucratic procedures that create unnecessary barriers,” said Natasa Pucar, Director of Corporate Communications at Studen Holding.

There is a big role for the financial sector that can help implement this initiative.

“The project launched by leading BiH companies deserves the attention of the financial sector. The banking sector still strongly supports activities aimed at strengthening the economy of Bosnia and Herzegovina, increasing exports, but also the production of quality domestic products that can compete with successful international brands. Apart from me, several other colleagues from the financial sector were involved in drafting this really high-quality document, which implementation would significantly strengthen the self-sustainability of the BiH economy,” said Dr. Sanela Pasic, CEO of Addiko Bank.

Media coverage of the economy and economic opportunities in BiH is also an important link aimed at improving the economic and business climate.

“Media interest should be focused on encouraging the work of other industries in BiH. Only the synergy of media and producers can change the consciousness of consumers to preferring domestic products, which results in benefits for the whole of BiH,” said the President of the Association of Electronic Media in BiH Elvir Švrakić.

The initiative “We can do it” presented concrete solutions which should encourage economic policy makers, private and public sector, public institutions, diaspora and non-governmental sector, to join forces and rapidly launch activities towards achieving a higher level of self-sustainability of strategic industries and products of BiH, which in a short time can bring desired results.

The Foreign Investors Council in BiH has already supported the initiative and some companies that are members of FIC, such as: Addiko bank, Bosnalijek, Studen Holding and BBI bank, are the initiators and key actors in the implementation of this initiative.

The document of the Strategic Initiative for Strengthening the BiH Economy (Version 1.0 | May 2020) can be found at: https://bit.ly/36Eg5mN