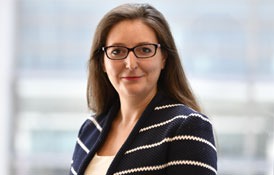 The EBRD has appointed Manuela Naessl to lead its operations in Bosnia and Herzegovina. She will follow Ian Brown as Head of Office in Sarajevo and assume her new post in October 2019.

The appointment follows the 2019 EBRD Annual Meeting and Business Forum in early May in Sarajevo. Boosted by the successful event which saw the signing of a loan of up to €210 million for the next step of the Corridor Vc road project, the Bank announced plans to commit up to €400 million to the country this year alone. To date, the Bank has invested €2.3 billion through almost 160 projects in the country.

Ms Naessl said: “I am very proud and honoured to take on this role and task. Our latest Annual Meeting has impressively demonstrated the EBRD’s commitment to Bosnia and Herzegovina and the Western Balkans and for me this will be the guidance for our future operations. Combining investments with policy reform engagement the Bank will support in particular the private sector, the promotion of the country’s regional cooperation and European integration and the development of the green economy, building on the strong foundations my predecessor has laid. €ť

Manuela Naessl is a German national who joined the EBRD in 2011 from the World Bank. At the EBRD she worked in the energy and natural resources teams and played a key role in the delivery of the 2014 Energy Sector Strategy. Most recently, she was Adviser to the Vice President, Policy and Partnerships. Ms Naessl holds an MBA from the London Business School and an M.A in International Economics.