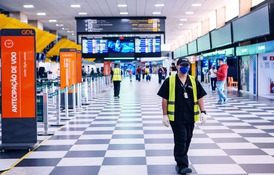 The FIC requested that the
Council of Ministers, in accordance with its powers, address certain outstanding
issues in the segment of the pandemic caused by the COVID-19.

Aware of the fact that this is a
global problem at the moment and that each country adopts different measures
and that countries that have clear measures, programs and projects to deal with
the new situation can make great progress in developing their economy, but also
their better positioning in global scene.

Although Bosnia and Herzegovina
recently have had satisfactory economic growth, the last few years have shown
that the tourism and hospitality sector has been a significant driver in the
further development of the BiH economy.

In addition to the increased
number of tourists in BiH who came and spent money contributing to the
development of the BH economy, foreign investments in the infrastructure of
this sector also increased, including international hotel chains, airlines,
investments in energy production, food, services, etc.

Foreign investors stated that
they are interested in the openness of Bosnia and Herzegovina to the world, of
course with clearly prescribed measures related to the new situation caused by
the COVID-19.

In this regard, they suggested
that the competent institutions prescribe measures for the entry of all foreign
tourists in BiH according to the same criteria that are applicable to EU
citizens, as soon as possible and to enable the arrival of interested tourists
in the coming months.

In
mid-September 2020, the BiH Council of Ministers adopted a Decision on
prescribing additional conditions for the entry of foreigners into Bosnia and
Herzegovina, which opens BiH borders to all foreign nationals, if they have a
negative PCR test for SARS-CoV-2 virus, which is not older than 48. hours until
the moment of entering BiH. This decision came into force on September 12, 2020
at 6:00 AM.