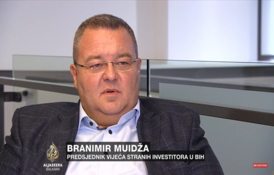 Due to a property dispute between
two companies from Sarajevo, more than 80 workers were physically prevented
from accessing their jobs for contempt of court, raising the issue of legal
certainty and the rule of law in the context of attracting foreign investors.

On that occasion, the president
of FIC, Branimir Muidza, in a statement for the media house Aljazeera Balkans,
said that legal uncertainty is one of the main reasons why investors bypass
Bosnia and Herzegovina.

It was pointed out that this case
is not isolated, which is confirmed by the President of the FIC, stating that
in BiH there is not enough rule of law and legal security, when we add the
complexity of the state organization, it is clear why there are no more foreign
investments in BiH.

According to available data,
foreign investments in BiH in the last 10 years are measured between 200 – 400 million
euros. The reasons for such low numbers lie precisely in the legal uncertainty,
the complex constitutional system, the complexity of the competencies of
various levels of government and the slow and complex procedures for starting a
business, it was concluded in a FIC statement for Aljazeera Balkans.