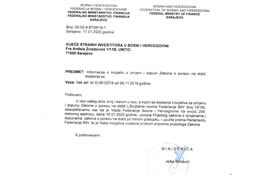 The Federal Ministry of Finance, by act no: 05-02-4-8738 / 19-1, today informed the Foreign Investors Council in BiH that the FBiH Government, at its 206th regular session, on January  16, 2O2O. adopted the Draft Law on Amendments to the Law on Profit Tax by urgent procedure, and submitted to the Federal Parliament, and that the FIC Initiative to amend the Law on Profit Tax was taken into account during the preparation of Draft Law.

By the way, the FIC initiative sent to the Ministry of Finance at the end of 2019, emphasize the need to urgently address the problem of negative effects arising from the application of the new international financial reporting standard IFRS 16.

As of January 1, 2019, a new standard, IFRS 16 – “Leases €ť, is mandatory in the FBiH, which eliminates the difference between the recognition of financial and operating leases with the lessee. Tenants from various industries have faced significant effects from the application of the new standard in the form of an increase in the former rental cost, which now consists of depreciation and interest costs. The cost is significantly higher in the initial years of the lease.
Having in mind the current provisions of the Law on Profit Tax of FBiH, depreciation is a recognized as an expense only if the assets are owned by the taxpayer. In this regard, it is urgently necessary to amend the provisions of the Law on Profit Tax in FBiH, which would regulate the tax treatment of depreciation of assets that will be noted in the financial books of the lessee by applying IFRS 16.

The initiative proposes to initiate an urgent procedure to amend the provisions of the Law on Profit Tax, which regulates depreciation and interest. As a result of this initiative, taxpayers would receive in due time (before February 2020) the legal basis for proper tax treatment of newly incurred depreciation and interest costs, which arose from the application of IFRS 16, i.e. would not be exposed to additional income tax costs.