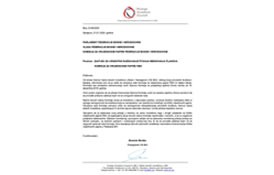 At the beginning of the 2020, the Foreign Investors Council in BiH sent a Request to the Federal Parliament, the Government and the Securities Commission to urgently resolve the issue of appointing new members of the FBiH Securities Commission, due to the suspension of the Commission’s work in December 2019.

In this way, the FIC requested the FBiH Parliament to include the appointment of the members of the Commission at the next session of the House of Peoples or to find a transitional solution that will enable its normal functioning of the Commission.

The current status of the Commission has put investors at a disadvantage and causes direct material damage due to the inability to invest funds intended and already operational in the securities market. The suspension of the work of the Commission primarily affects the impossibility of recapitalization of companies, members of the FIC, preventing them from fulfilling their legal obligations and strengthening the capital base.

“We believe that resolving this issue is in the interest not only of investors but also of other entities in the FBiH securities market, and we assess that the current status of the Commission is unacceptable and unsustainable, and that the negative consequences are far-reaching. Following the above, we request that the resolution of this issue be approached as a matter of urgency, with due care and respect for its importance, and to find a solution that will ensure the continuation of the Commission’s work and thus exercise their legal powers and smooth functioning of the securities market in the Federation. BiH “, states in the FIC’s request.

Given that this problem has not yet been resolved, the President of the Foreign Investors Council Branimir Muidža, the President of the Association of Banks of BiH Berislav Kutle and the President of the Association of Employers of FBiH Adnan Smailbegović agreed on joint activities to resolve this issue. A request was again made to urgently put on the agenda the issue of appointing members of the FBiH Securities Commission, which again drew attention to the urgency of eliminating delays in the Commission’s work, for the benefit of the banking sector, which is most affected by this situation, and the business community. in BiH as well.

“We still want to believe that the competent structures within the FBiH Parliament will recognize the urgency of resolving this issue and enable the efficient functioning of the securities market.” We invite you to understand the seriousness of the situation and the immeasurable negative consequences that will arise due to the delay in the work of the FBiH Securities Commission ” – stated from these three business associations.