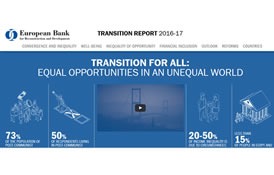 Transition for All: Equal Opportunities in an Unequal World

The EBRD office in BiH announced the launch of the EBRD Transition Report 2016-17 in Banja Luka on 13 March 2017 and Sarajevo on 16 March 2017. This report is EBRD’s annual update on reform progress and economic developments across 36 countries from Central Europe to Central Asia and the Southern and Eastern Mediterranean. The report outlines some of the key developments over the past year and it discusses the transition challenges ahead – for Bosnia and Herzegovina and for the wider region.

The EBRD Transition Report 2016-17 – Transition for All: Equal Opportunities in an Unequal World – casts a spotlight on inequality and inclusion, explaining how a failure to deliver a fair distribution of the fruits of progress may lead to setbacks in political and economic development. It also explores the causes of inequality of opportunity and looks at how to strengthen financial inclusion. Tracking the successes that have been achieved in post-communist societies, the report concludes that the “happiness gap €ť has finally closed with people on similar incomes in non-transition countries, but warns that not everyone has shared in this economic prosperity. This latest annual analysis draws on a wide-ranging survey of people who have experienced transition first-hand. The online version of the report also has a detailed assessment of macroeconomic developments and structural reforms in Bosnia and Herzegovina and other countries of the region, and the challenges ahead for 2017: http://2016.tr-ebrd.com/.