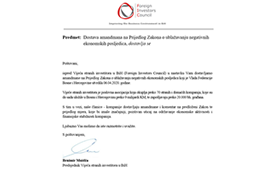 After the FBiH Government, at its extraordinary session held on April 6, 2020, formulated a draft Law on Mitigation of Negative Economic Consequences Caused by the COVID-19 Pandemic, and directed it to be adopted by the FBiH Parliament as a matter of urgency, the FIC members of submitted amendments and comments on the proposed Law as well as proposals for measures that would have a significant, positive impact on maintaining the economic activity and financial stability of companies. FIC has submitted a total of eight amendments to the draft Law.

The special intention of the public and the real sector was triggered by Article 4 in the draft Law, called “Subsidizing €ť, which stipulates that business entities covered by this Law are entitled to subsidy of contributions in the amount of 244,85 KM per month for each employee, starting from paid gross wages for April 2020 and each following month, including the wages paid in the month following the end of the pandemia. According to the Government’s proposal, subsidizing the contribution for each employee would be done in such a way that for the pension and disability insurance the amount of 135,70 KM, for health insurance 97,35 KM and for unemployment insurance 11,80 KM. The condition for subsidizing is that company have 20% or more drop in revenue compared to the average revenue in January and February 2020.

Despite the good intention of the FBiH Government to intervene in the rescue of the FBiH economy, FIC members’ opinion is that this legal solution will not produce satisfactory effects, and that the Law should allow real assistance and financial injection to the entire real sector. In this regard, FIC members proposed to amend Article 4 in such a way that business entities covered by this Law have the right to subsidize minimum wages and all related minimum wage contributions, general water fees and accident insurance benefits, in full amount per month, for each employee, starting with the gross salary for the March 2020 and every following month, including the salaries for the month after termination of pandemic, if they have 10% or more drop in revenue compared to the 2019 comparative period.

The proposed amendment to the draft Law would represent a minimum of “subsidy” below which the Governement cannot go if this Law seeks to mitigate any economic consequences. Otherwise, most businesses that are really affected by the economic crisis will nevertheless terminate their employment contracts and send their employees to the Employment Bureau because termination of the contract gives employees the right to receive approximately 380 KM/month, while the employer has no costs. So, employees will certainly receive the same minimum amount and the employer will not incur any costs.

FBiH Parliament will consider and adopt draft Law on Mitigation of Negative Economic Consequences on the next session scheduled for April 23, 2020.