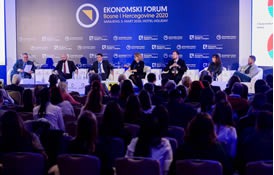 The keynote speaker of the 2020 Forum was Dr. Jeffrey Sachs, Special Adviser to the Secretary-General of the United Nations for the Sustainable Development Goals and Professor at Columbia University.

In the second session, representatives of banking sector and the IT sector in BiH and Croatia spoke about the importance of digital development and the future of digitalisation in the Western Balkans, with reference to the banking sector. Speakers of the second panel were: Jasmin Mahmuzić, Director of the Banking Agency of the Federation of BiH; Boško Mekinjić from the Management Board of the Association of Banks; Martina Drvar, Vice Governor of the Croatian National Bank; Mersed Čamdžić, Director of Mistral, and Amina Karić, Vice COO of Authority Partners. The moderator of the second session was Branimir Muidža, President of the Foreign Investors Council in BiH.

Economic Forum BiH 2020 was opened by prof. Dr. Jasmina Selimović, Dean of the Faculty of Economics in Sarajevo, Zoran Tegeltija, Chairman of the Council of Ministers of BiH, and Johan Sattler, Head of the European Union Delegation to BiH and EU Special Representative in BiH.